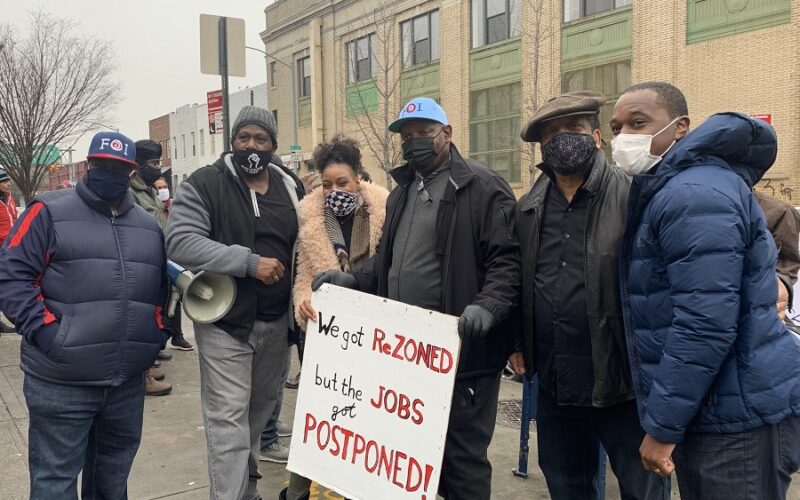 See the video below.

The Coalition for Community Advancement, along with BocNetwork, North Brooklyn YMCA, CHLDC, Universe City NYC, United Community Centers, Just Hauling, Local Development Corporation of East New York rallied over the weekend, demanding immediate accountability and transparency from the City and the Economic Development Corporation (EDC) on their unfulfilled commitments to invest $16.7 Million into the East New York Industrial Business Zone (IBZ) and the creation of 3,900 jobs. These jobs and investment were promised back in 2016, through the East New York Rezone. Now, 4 years later, we should have seen $6,680,000 of those investments and 1,560 new jobs. To date, we have not seen either of these commitments.

While developers are currently experiencing the benefits of the increased density made available through the rezone, the community has not received the benefit of jobs promised. We are in a pandemic that has further exacerbated the unemployment and underemployment crisis of our community. Where are the 3,900 jobs? The organizers are demanding the EDC and the City to answer for the promises they made to the East New York community.

The key demand is economic justice. The organizers are demanding 3,900 local, livable-wage paying jobs, and transparency, accountability, and action from the EDC and the City.

“Real estate developers have been given opportunities to build wealth off our communities, but what do we get? Where are the opportunities for our workers and our families? The East NY rezoning promised 3,900 jobs and there has been a failure to deliver. We demand good jobs at thriving wages for the people of East NY!” – Sandy Nurse, Co-Director Just Hauling

“There is NO Distinction between Economic Injustice and Racism. We need to start putting Community Benefit at the Core of our Economic Strategy in order to ensure economic and social mobility for the Entire Community of East Brooklyn. The City, at every level, should be working in Solidarity with the People and Organizations currently existing in East Brooklyn in order to succeed — Not Against Us. Preserving and Strengthening our IBZ should be decided upon by the Community and not left in the hands of the Economic Development Corporation, The Department of City Planning and this or any administration to Dictate. It’s time we begin aligning our economic and ecological perspectives and reduce the amount of broken promises that are fed to the public. We need to start promoting and advocating for policies and zoning that protect our communities health, and environment for future generations to come.” – Brittany Markowitz, Co-founder & CFO of Universe City NYC, and Owner of Maverick Scrap Metals Ecology

“At the heart of any at-risk, under-served community, you will find high unemployment and underemployment. Therefore, to transform East New York and alike communities, local workforce development initiatives must be the centerpiece. Today, we hold the De Blasio administration responsible for an unkept promise to increase employment by 3,900 individuals. Local stakeholders agreed to 6,000 new units of housing for 3,900 new jobs. To this point, the only way to achieve 3,900 new jobs is to develop local assets like, Broadway Junction, through a community based process. Show me the jobs!” – Bill Wilkins, Director of Economic Development at Local Development Corporation of East New York

“Our neighborhood was one of the hardest hit in the current COVID 19 pandemic. Many businesses are closed and unemployment is hitting record levels. Typically, our unemployment rate is 5-10% higher than the city average and the current crisis has only exacerbated this unjust disparity with an unemployment rate nearing 25%. I am here to highlight a local concern of neighborhood advocates who have organized the Coalition for Community Advancement. The group was first formed when the neighborhood was facing a massive rezone which occurred in 2016. I am here to say that the agreements made in that rezone process have not been kept. Developers are experiencing the benefits of the increased density, but the community has not received the benefit of jobs promised. We were promised 3,900 jobs as part of $16.7 Million dollar investment in the local IBZ. I am here to ask, “Where are the 3,900 jobs?” We need EDC and NYC to answer for the promises they made to our community.” – Lowell J. Herschberger, East New York Resident, leader at the Cypress Hills Local Development Corporation, and member of the New York City Employment and Training Coalition.

Previous PostVIDEO: Guests Joined Nikki Lucas On Screen in the Discussion The To Save NYCHA

Next PostReal People of ENY: Dominique Carson—a Writer Fulfilling her Dream and Telling the Stories That Matter