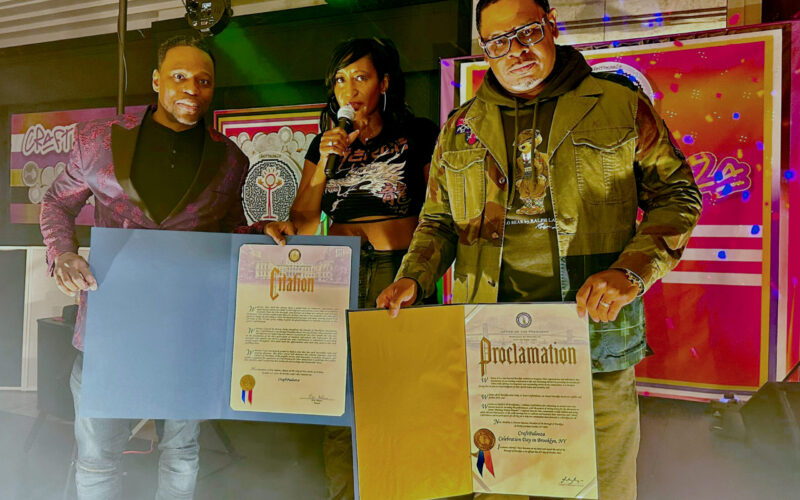 It was a pleasantly warm afternoon on Saturday, October 22nd, when executive directors Dewry DuRoi Bradford and Kirk “Dmarco” Inniss entered the ballroom at the Tillary Hotel.  As they arrived early, they were met by workers bustling around hanging paintings, setting up walls and building the runway.  The food vendors began to arrive with cartons of water, champagne and gourmet items.  The excitement was building for it was the official launch of CraftPalooza.  Over 500 Creatives and spectators converged on New York City to experience the essence of Brooklyn’s street culture.  It was a true reunion of creative minds in one location for the purpose of sharing their artistic expression through fashion, art and entertainment.  Prior to that day, there’s been a lot of buzz surrounding this event.    Brooklynites began calling CraftPalooza the New York version of Art Basel.

As soon as you entered off of the elevator, you were met by artful vendors complete with a step n repeat and red carpet displaying all of the sponsors who made the event successful.  On entering the ballroom, to the right was a full display of various expressions of art in the form of paintings, clothing and figurines.  To the left was a spread of food vendors showcasing and serving carefully designed hors d’oeuvres, freshly squeezed juices and treats all for free.  For VIP, the champagne and wine was flowing.  On the wheels of steel was scratch-master DJ – Diamond The Artist and DJ Red Bottom playing Hip Hop, Gospel and R&B tunes from the 90’s to present day.  Bold 8-ft tall walls brandishing the name “CraftPalooza” lined the entire venue with strong statements of love for New York City.  There was no mistake that upon entry, you stepped into a CraftPalooza branded event.  And this was all before the activities on the long runway began.  At 6:30, host – Phya Storm calls everyone to the stage to begin the festivities.  Rack-Lo then grabs the microphone to announce the start of the fashion shows.  Before the presentation of season 1 of Life, he kicks it off with the classic Lo-Life tradition called “Lo-Goose on the Deuce”.  It’s an ensemble of models prancing around the runway sporting Polo Goose down jackets and coats in a wide range of colors.

HOW IT ALL BEGAN:

In 2018, Dewry DuRoi launched a health & sports festival called HealthJox Festival and in 2020, he established the HealthJox Foundation, Inc. nonprofit to provide healthy services to underserved Youth within the borough of Brooklyn.  He knew that there was a greater pull towards Creatives because he discovered that most black and brown Youth learn better through the arts.  This desire to reach the Youth where their interest lies, began his journey to form CraftPalooza.  Speaking with his long time friend and rapper Kirk “Dmarco” Inniss, they devised a strategy to bring Creatives together for a day of art, performances, spoken word, food & drinks.  They knew this event had to have all the elements of nostalgic Brooklyn in order to pull it off.  What’s more Brooklyn than Youth wearing Polo Ralph Lauren from head to toe?  Dmarco called on his childhood friend Prance-Lo from NYC fashion icons – the Lo-Life’s to lock-in Rack-Lo to curate the fashion portion of CraftPalooza.   Dewry then locked in a deal with Jeff Beler – founder of UnderHill Walls to curate the street art exhibit.  Dmarco then called on Exodus Productions to produce the live performances throughout the evening.

According to Dewry DuRoi, within the 5-boroughs, there was a huge void that needed to be filled within the Creative Industries.  Being a fashion designer by trade, he spent a lot of his time surrounded by creative minds.  He would attend multiple functions weekly throughout the city, none of which had a true sense of communal art vibes on a large, consistent scale.  With so many talented individuals in New York, it seemed like there wasn’t an authentic platform where Creatives could get together and just “be”.  Out of this desire, came the building blocks for the CraftPalooza concept.

CraftPalooza is a FREE Art Exhibit & Fashion Show with a live performance component.  With a sold-out event, attendees enjoyed a full day of Brooklyn, New York’s cultural experience with a silent auction of over 30 of the top NYC graffiti artists by art purveyor and nonprofit – “Jeff Beler and UnderHill Walls” to raise money for the HealthJox Foundation’s Curriculum: “Pursuing Purpose Program”.  Attendees also enjoyed free food and drinks.  We gave away free sneakers and socks to formally incarcerated shelter residents of the Tillary Hotel through “It’s From The Sole”.

Notably: Marco Santini’s live art piece sold for $1,000.  In attendance was some of the greatest Tastemakers from the Art, Fashion and Music Industries.  We also had New York politicians, judges, celebrities, news media and community organizers in attendance.

Healthjox Foundation and CraftPalooza announced the award recipients who was honored with the “For The Love Of NYC” award:

Andre McDonald: IT’S FROM THE SOLE

Notably: It’s From The Sole provided FREE SNEAKERS AND SOCKS to the residents of the homeless shelter within the Tillary Hotel managed by Exodus Transitional Community. We will also have many other items raffled off as well.

HealthJox Foundation (501(c)(3) nonprofit) was established by Dewry DuRoi Bradford to help troubled Youth within the inner city of New York to discover their purpose in life.  They created an ALTERNATIVE TO PRISON PROGRAM with the Judges of New York City called “Pursuing Purpose Program”.  This was setup to help Youth redirect their thinking realizing that they are A BRAND and need to begin to find and cultivate their purpose in life.  We believe that CraftPalooza will be a great way for them to experience the creative arts in a big way.  We are really representing BROOKLYN to give everyone a sense of Brooklyn, New York-pride.

Previous PostBeverly Tatham, Candidate For Civil Court Judge Wants To Remind You To Flip Your Ballot!