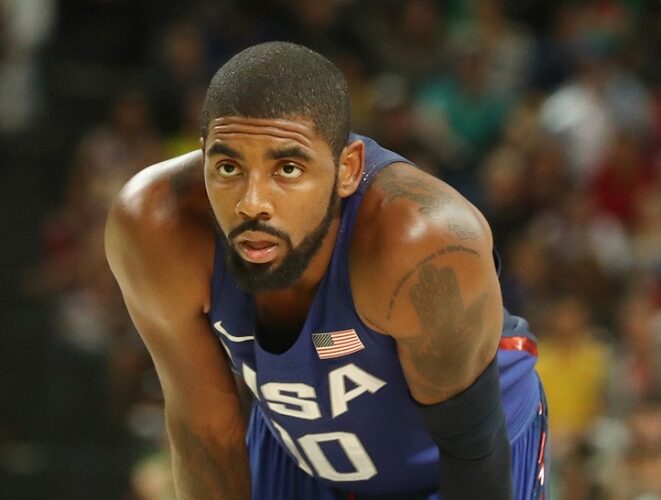 After the Nets lost to the Indiana Pacers Saturday night sports reporters decided to completely skip questions about the game and go right in on trying to paint Kyrie Irving as an antisemite. The accusation was made in response to Kyrie simply posting on his Twitter page that he had watched a documentary on Amazon, titled Hebrews to Negroes: Wake Up Black America.

Kyrie Irving stated during the dialogue, “we’re in 2022, it’s on Amazon, public platform. Whether you want to go watch it is up to you. There’s things being posted every day. I am no different than the next human being, so don’t treat me any different. You guys come in here and make up this powerful influence that I have over… ‘You, you cannot post that.’ Why not? Why not? Everybody post everything else. You saw the word nigger going up on Twitter, right? I don’t hear uproar on that.”

Black people have to be careful not to fall into the trap of siding with the media against other Black folks.

This controversy comes on the heels of the new movie coming out titled Till, about Emmett Till, the 14-year old black boy who was beaten, tortured and lynched to death by a group of white men for supposedly whistling at a white woman.  Now, that’s racism that Black people have had to deal with for hundreds of years, but in 2022 a Black man can’t even watch a movie without being called an antisemite.

The media and social media are waging a new war against Black people. It’s like the modern-day lynching of Black people can be found in the media and on social media. The time is different, but the game is the same. Accuse a Black man of “whistling at a white woman” or today “maybe posting something that might be considered antisemite to some folks” and you go out and try to hang him in the media. Black people have to be careful not to jump on that media bandwagon. Today it’s Kyrie and tomorrow it will be you.

Read the full transcript from Kyrie Irving’s dialogue with the sports reporters.

Meghan Triplett: Kyrie, going into tonight, there’s been a lot of backlash that you’re receiving. Do you have a response or reaction to everything that’s going down?

Kyrie Irving: What kind of backlash are you talking about?

Meghan Triplett: Some are questioning…

Kyrie Irving: Yeah, I’ll break down the day for you. I went back home to get ready for the game, and I was on Amazon Prime, and I’m sitting there on my phone at the same time. I usually do those things. Like I watch documentary, I watch, a program that’s education first that either talks about history, or finance, or it talks about the state of the world. I’m all over the place when it comes to, you know, really elevating my consciousness because I didn’t get it in school. All I did was get seven hours a day being indoctrinated and brainwashed on a history that doesn’t belong to me or my ancestors. So that day, particularly, I went home and I was on Google. Of course people love that search engine; I wasn’t looking for any anti-Semitic stuff or anything specifically on any race of people. I looked up my name and what it means and it’s a title given to Christ, Philippians: 211. My name translates into Hebrew language as ‘Yahweh.” So I went on Amazon Prime. I was like, ‘You know what? Let me see, are there any documentaries on “Yahweh.” So I went in the search bar, typed in “Yahweh.” That came up. Went out and shared it on my platform, that was my night. In terms of the backlash or what people call it, we’re in 2022. History is not supposed to be hidden from anybody, and I’m not a divisive person when it comes to religion. I embrace all walks of life. You see it on all my platforms. I talk to all races, all cultures, all religions. And my response would be, it’s not about educating yourself on what Semitism is or what anti-Semitism is. It’s really about where the root words, where these come from and understanding that this is an African heritage that is also belonging to the people.

Africa is in it, whether we want to dismiss it or not. So the claims of anti-Semitism, who are the original chosen people of God? And we go into these religious conversations and it’s a big no-no, I don’t live my way like that. I don’t live my life that way, excuse me. I grew up in a melting pot, and I say a melting pot of all races. White, black, red, yellow, Jewish, Christian, Muslim. You see the way I live my life now, I’m not here to be divisive. So they could push their agenda – I don’t want to say, because I’m not identifying any one group or race of people, but I’m in a unique position to have a level of influence on my community. And what I post does not mean that I support everything that’s being said, or everything is being done, or I’m campaigning for anything. All I do is post things for my people in my community and those that it’s actually going to impact. Anybody else that has criticism, it obviously wasn’t meant for them.

Brian Lewis: Hopefully I’m understanding what you said and I want to make sure I get it right because I don’t want to …

Kyrie Irving: I don’t expect understanding from a media conglomerate group that sincerely talks about the game of basketball, and then you bring up religion as if it’s correlated at times when it’s convenient for people to bring it up. So please just be direct with your question so we can move on from this and I can talk about the game, and go home to my son Eloheim and my wife Marlene, okay?

Brian Lewis: Am I to take it that this was – what you shared – was not something that you’ve even watched?

Kyrie Irving: I watched it.

Brian Lewis: Okay, you did watch it –

Kyrie Irving: I did. I had a lot of time last year, a lot. I read a whole bunch, good and bad, about the truth of it.

Brian Lewis: So then do you, I guess, understand or not understand those that might imply that that had anti-Semitic leanings in it? And we ask this because the tweet is still up there, so…

Kyrie Irving: We’re in 2022, it’s on Amazon, public platform. Whether you want to go watch it is up to you. There’s things being posted every day. I am no different than the next human being, so don’t treat me any different. You guys come in here and make up this powerful influence that I have over… ‘You, you cannot post that.’ Why not? Why not? Everybody post everything else. You saw the word nigger going up on Twitter, right? I don’t hear uproar on that. I’m not here to be divisive on what’ s going on on this or that, I’m not comparing Jews to Blacks. I’m not comparing White to Black; I’m not doing that. That conversation is dismissive, and it constantly revolves around the rhetoric of who are the chosen people of God. And I’m not here to argue over a person, or culture, or religion on what they believe. Nah, This is what is here. It’s on a public platform. Did I do anything illegal?

Kyrie Irving: Yeah that’s what I’m saying, did I do anything illegal? Did I hurt anybody, did I harm anybody? Am I going out and saying that I hate one specific group of people? So, out of all the judgment that people got from me posting, just, without talking to me, and then, I respect what Joe said, but there has a lot to do with the, not ego or pride of how proud I am to be an African heritage, but also to be living as a free black man here in America, knowing the historical complexities for me to get here. So, I’m not going to stand down on anything that I believe in. I’m only going to get stronger because I’m not alone. I have a whole army around me.

Nick Friedell: Kyrie, while we’re on the topic of promotion, why did you decide to promote something that Alex Jones said?

Kyrie Irving: That was a few weeks ago, I do not stand with Alex Jones’s position, narrative, the court case that he had with Sandy Hook, or any of the kids that felt like they had to relive trauma or parents that had to relive trauma or to be dismissive to all the lives that were lost during that tragic event. My post was a post from Alex Jones that he did in the early nineties or late nineties about secret societies in America of a cult. And it’s true. So I wasn’t identifying with anything being a campaignist [sic] for Alex Jones or anything. I was just there to post. And it’s funny, and it’s actually hilarious because out of all the things I posted that day, that was the one post that everyone chose to see. It just goes back to the way our world is and works. I’m not here to complain about it, I just exist.

Nick Friedell: And to follow up on the promotion of the movie and the book-.

Kyrie Irving: Can you please stop calling it a promotion? What am I promoting?

Nick Friedell: You put it out on your platform.

Kyrie Irving: But I’m promoting it? Do you see me doing-.

Nick Friedell: By putting it out there people are going to say-.

Kyrie Irving: Yeah I put it out there just it like you put things out there, right?

Nick Friedell: Yeah, but I…

Kyrie Irving: Okay. You put things out there for a living, right?

Nick Friedell: Right but my stuff is not filled with anti-semitic stuff.

Nick Friedell: I’m not, I’m not doing that. You’re free to post whatever you want.

Kyrie Irving: I can post whatever I want, so say that, and shut it down and move on to the next question.

Nick Friedell: But Kyrie, you have to understand that…

Kyrie Irving: I don’t have to understand anything from you.

Nick Friedell: It’s not me.

Nick Friedell: By posting what you did…

Nick Friedell: But by posting what you did…

Kyrie Irving: Next question, next question. Do you guys have any more questions for me?

Nick Friedell: People are gonna say “Do you have anti-semitic beliefs?”

Kyrie Irving: Cause this is going to be a clip that he’s going to marvel at. Is there any more questions?

Nick Friedell: But you’re not answering the question.

Kyrie Irving: “Uhh uh uh uh you’re not answering the question, oh my god. Let’s make another Instagram clip so we can be famous again.” Next question?

Kyrie Irving: “Wish you would feel the same about Black reproductive rights, about the things that actually matter, instead of what I’m posting. Fix your life, bro.”

Next PostBeverly Tatham, Candidate For Civil Court Judge Wants To Remind You To Flip Your Ballot!