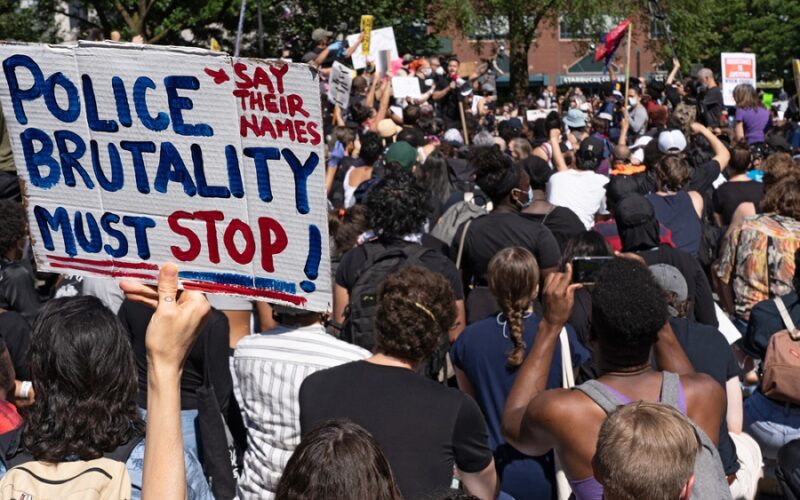 City Council Candidate, Nikki Lucas, has a plan to bring the community of East New York into the 21st Century. Her campaign policies span various issue areas. However, one of the most critical and relevant to today’s issues is her plan to address East New York’s problem with police brutality, which will impact the entire city.

For years, District 42, which includes East New York, Brownsville, Starrett City, Canarsie, and East Flatbush, has experienced staggering disparities related to this issue. A recent report revealed that the area had 1,364 complaints against officers, compared with only 46 in places like Park Slope.

Those are the numbers. The story behind the numbers plays out in scenarios like the incident in May 2020, when police officers got into a violent altercation with Black East New York residents over enforcing social distancing rules. At that time, 40 people were arrested for social distancing violations, and 35 were Black.

“We Have to Be Proactive”

The outcries when things like this happen are there, but Lucas has noted that no one in leadership has proposed any concrete solutions.

“The politicians in East New York have been loud after someone is assaulted or killed by a police officer, but they have not created any solutions to stop the harassment, assaults, or killings at the hands of the NYPD. We have to be proactive, and that’s what this plan is all about, not just the Police Reform part of the plan but the entire plan. We can no longer fight from behind.”

Lucas was referring to Charles Barron, the local East New York politician who has been in office for the past 20 years. Barron is known for being vocal and brash, but Lucas’ point is that for all his brashness he has not passed any legislation or policy that has improved many of the problems that East New Yorkers face, including the problem of police brutality and harassment.

Barron is currently the Assemblyman in East New York, but he is now running for City Council, a seat that he held for 12 years back in 2001. Barron and his wife Inez switched political seats in 2013 and they are trying to do it again in 2021. However, Lucas has the momentum, along with raising more than double the amount of funds that Barron has raised, and double the amount of in-district donors, she was recently endorsed by the UFT and Congressman Hakeem Jeffries.

“We need to write legislation and policy in order to realize change. The people are crying out for bold changes, but there’s really nothing bold about holding police officers accountable through legislation and policies. The people have been asking for it for years. I think it’s time to give the people what they have been asking for. We are finally going to move the district into the 21st century and out of the nineties. The current elected officials are still playing old time family legacy politics and it’s hurting the community.”

In Lucas’ 21st Century Rescue Plan for East Brooklyn, she outlines bold ideas for holding NYPD officers accountable. One of the boldest is automatic termination for officers with three citizen complaints, which are substantiated by an Elected Civilian Complaint Review Board that would be completely independent from the NYPD.

However, there are six other components of the plan that help to create a holistic strategy for easing tensions between NYPD officers and the communities they serve:

While all these policies are noteworthy, Lucas has received some favorable feedback regarding the three strikes termination policy from retired and current police officers:

“I spoke to retired and current police officers, and they believe the three strike rule for termination makes sense. One retired officer told me that he went through his entire career with two complaints, but neither was substantiated, which means he finished his entire career with no substantiated complaints, so we know that a three-strike rule for termination can work. Officers who are doing their job properly without assaulting or harassing people have nothing to worry about. Those who are harassing and assaulting residents who have not even committed a crime should be worried. This policy is for them.”

Moving From “Policing” to “Protection”

Lucas also spoke with officers about how the impact of requiring officers to live in the five boroughs could change the perspective of officers from “policing” to one of “protection”:

“I spoke to officers regarding this part of the plan, and they told me that it makes sense and they agree with it. One officer informed me that he had to stop officers during arrests when they were overly aggressive during altercations. He would tell other officers that he lives in the city and the people are his neighbors. He sees them at the grocery stores and the malls. Officers themselves want this change. If you live in the five boroughs, you have a better understanding and relationship with those you are protecting. This is pure common sense.”

However, one of Lucas’ 21st Century Rescue Plan’s most critical components, and one that could help both East New York residents and officers, is creating the Mental Health Wellness Response Team. Lucas expanded on how this provision is crucial to the overall goals of the plan:

“Police officers, whether the NYPD or in some other city, are not mental health professionals, and they are being put in an unfair position to be expected to respond to mental distress calls. They don’t understand the basis for the call in the first place. The call is not because there’s a crime being committed; the call is usually made because someone is in mental distress and needs assistance. Mental health experts responding to these events would understand that the well-being of the person in distress is the priority. “

Lucas went on to explain that while officers may be called to assist, the mental health professionals would play the primary role in handling the situation:

Again, ultimately, the goal is to transition the area into the 21st century: 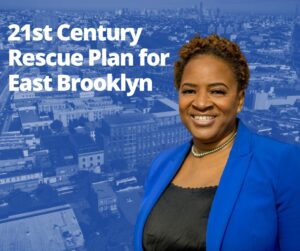 “East New York leads the city in homelessness, police brutality, and gun violence, while we are at the bottom when it comes to the arts, technology, education, and health care. We are 20 years into the 21st Century, but our community has been stagnant for the entire 20 years, which is why we need a Rescue Plan.”

Read the entire ‘21st Century Rescue Plan for East Brooklyn‘. Lucas is asking other City Council candidates across the city, as well as Mayoral, Brooklyn Borough President and Comptroller candidates to pledge to support her plan. Candidates can Pledge their Support Online.