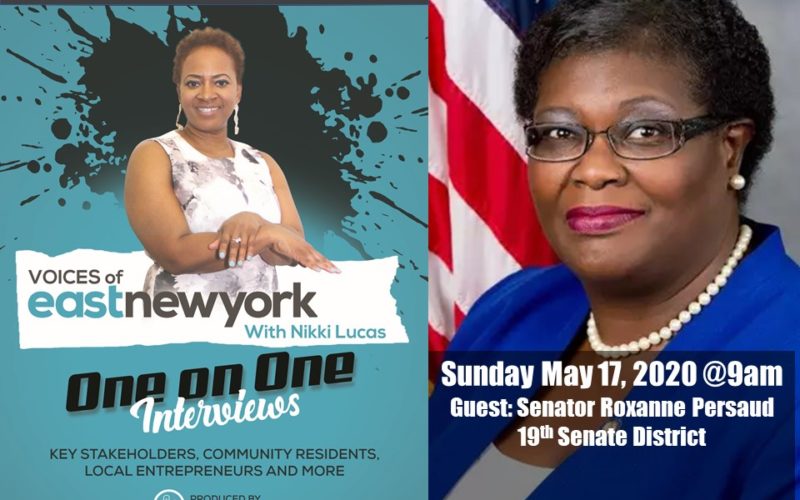 The show is the live weekly video series covering issues that impact East New York and surrounding areas.  Persaud will be discussing the impact that COVID-19 is having on the community, housing and other issues that are concerning to residents throughout East Brooklyn.

Viewers can watch the show live at Facebook.com/EastNewYorkNews/live. If you have questions for the Senator you can ask them during the show.

To suggest a guest for upcoming shows send an email to info@jig.media and put “Guest” in the subject line.

Roxanne Jacqueline Persaud was elected to the State Senate in November 2015 after serving in the State Assembly. She has been reelected twice. Currently, she serves as the chair of the Social Services Committee as well as a member of the Banks, Children and Families, Commerce, Economic Development and Small Business, Labor and Transportation Committees.

Roxanne spent many years as a Higher Education Administrator prior to being elected to the State Legislature. In addition, she is a longtime advocate for the community. She served as President of the 69th Precinct Community Council in Canarsie, a member of Community Board 18 and Commissioner on the New York City Districting Commission. She also is a graduate of the NYPD Citizens Police Academy as well as, the New York City Office of Emergency Management-Community Emergency Response Team. Additionally, she was a member of Community Action Board of the New York City Department of Youth and Community Development and Chairperson of the Neighborhood Advisory Board – District 18. She also serves on organizations highlighting domestic violence and cancer awareness among others.

To find out more about Senator Persaud click here.