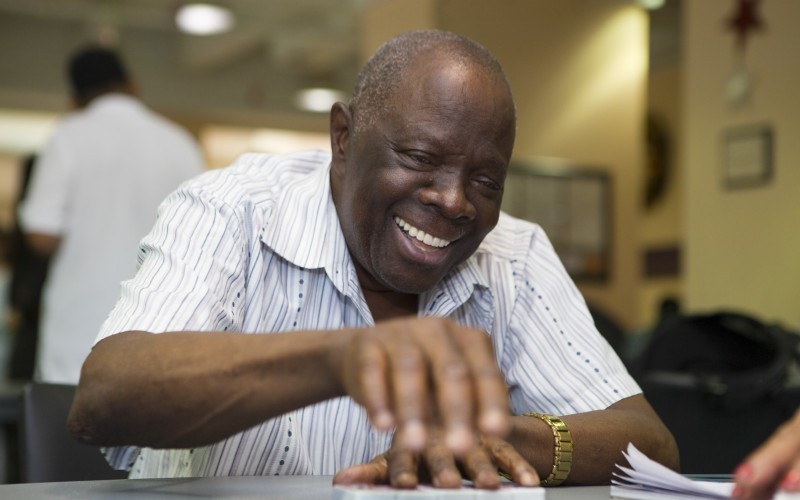 Brooklyn hosts 232 inventories of soup kitchens, food banks, pantries and other similar outlets, higher than other districts in New York City. This can clearly be observed from the food listing section of the Food Pantries site. Several sources disclosed the important role these outlets offer to Brooklyn and Brownsville communities.

During a visit to one of the pantries on a Saturday morning at a local worship center, the pantry was a beehive of activities. Evidently in this pantry were assorted vegetables and fruits neatly displayed like a section in a supermarket.

Different people who had taken turns at the entry leading to the food section drove carts and took bags along. A pleasant sight was a well-prepared and elaborate breakfast ready for some soccer stars. Giving a speech was a local law enforcement affairs member who spoke profoundly about the adverse effects of juveniles signing up as gang members.

The worship center was established by Reverend Anthony Graham, who holds a post-graduate degree from St. John’s University and a D.Min degree from Bakke Graduate University, Texas.

The church is ascribed as “a single church in three different sites,” Brooklyn, Bronx and Staten Island. The community church has several missions, called ministries and they include the provision of welfare initiatives for immigration, property, jobs and other social concerns.

The founder stated that the food store in the center was a planned initiative to reach out to the community. People visit, and have a look around and get their needs. We carefully look at the situation as a source of empowerment. This is an initiative that we’ve been working upon for some time and we intend to keep up the tradition. And the entire idea of providing people the opportunity to make a choice, I believe, is a force so people aren’t just receiving items in a bag.”

Concerning the needs of elders, Graham expressed that the center reaches out to both the members and non-members alike. “We look out for companionship, for relationship, an intense desire for creating bonds. The nation glorifies the youthful and as people advance in age, they become slowly insignificant and forgotten.” Graham stated.

Talking further, “I intend to create a bond between the elders and the younger generation, says Graham,” I look out for elders that have keen understanding, irrespective of their ideology, and of course, elders that have seen many days and are moderate to become a part of our mentorship initiative where the younger ones can connect with, this provides a significant benefit where the young can share the values of the seniors” he declared.

How can this be achieved?” Elders visit us daily from eleven till two, and we also have a different group of seniors though just below 20 people that come every day, although we expect the number to increase as the fellowship grows and people make more free time for themselves.

The worship leader expressed concerns that only 70% of elders that fellowship with the center has stable means of living or one form of social benefits.

How does the rest cope? He mentions one example: “On a Saturday morning, a woman said to me, ‘ Pastor, besides the groceries I get from the fellowship weekly, I don’t get another’. She later told me how she was an illegal immigrant and she was a senior with health concerns, and lacked benefits that other people do not appreciate. Since she’s without legal documents, there are no social benefits of course.”She chose to stay in the country after a short visit. She does not intend to leave because she has been around for many years; however, she wasn’t ready for living as an elder. And what does she have left? The church.”

The church is opened all through the week because it “bears different kind of problems” of people who seek refuge, he says.” The desires of visitors are broad and are many. Being in charge, I keep a job outside the church so that the church does not incur more burden. So, we can keep functioning” while working on the ministry and pay the workers here.

Graham noticed that when compared with seniors in Staten Island and Bronx, people in the East New York ministry have enormous challenges. He declared further that in the innermost part of the communities in East New York, “the challenges are more severe, although there are also similar concerns in other areas.”He expressed.

Unfair treatment is an issue.”If people are proficient, they still get treated unfairly as some employers do not pay the recommended wage,” the worship leader says.” And this creates a cycle because people do not have much choice. It becomes dire as people advance in age, and more concerns are raised in their health and like situations. And the means for dealing with these challenges is lacking.”

The Reverend says hope is the short term tool we have to get finance, but for the long term, we intend to set up homes for the seniors and people just leaving prisons.”He illustrated his saying that lots of people that were incarcerated for long periods were returning to the community, and in most cases, there are no initiatives to help them. We intend to set up a program for them. Men need to be occupied so they don’t enlist in things that won’t profit them.”

The worship center intends to buy more properties. “Elders are in dire circumstances and need housing” and other necessary things, he expressed. The pastor was inquired about what he felt could be happen to East New York in the future. “Many pleasant things will occur. More houses are been renovated and revived” he says.

Though he also mentioned, “The community is now safer than what it used to be years back. My dream is that the community will get more jobs, support initiatives and social benefits so that many people who were forgotten by the society can also share in the American Dream. It is my earnest desire that this transformation occurs. More fellowship centers like us would spring up, although i also wish that charitable organizations would also be formed.”

Graham has aspirations for the community as be believes East New York can hope for brighter days” affordable housing and lesser taxes than other areas like Manhattan and other similar places of interests. It’s more affordable to own a property in this part of the city,” he says.

While he believes an improved society provides great benefits, he also feels that poor maybe at risk of being pushed out of the community. And where do they go?

Many properties are being refurbished and sold off. It’s better for the community not to have buildings that are burnt-out close by–but in many cases, the poor occupy these buildings, and they are left with no alternative that going to shelters, And that’s a different reality for them.”

Graham believes East New York has an advantage despite the challenging situations that plagues the community. It is a haven. There’s never robbery or gang fights, never regardless of the problems all around… I see the community as a place with opportunities for fresh initiatives and I believe it’s a great place for construction. I’m constantly seeking people who are intent on partnership and investment because it’s an excellent place for housing projects.”