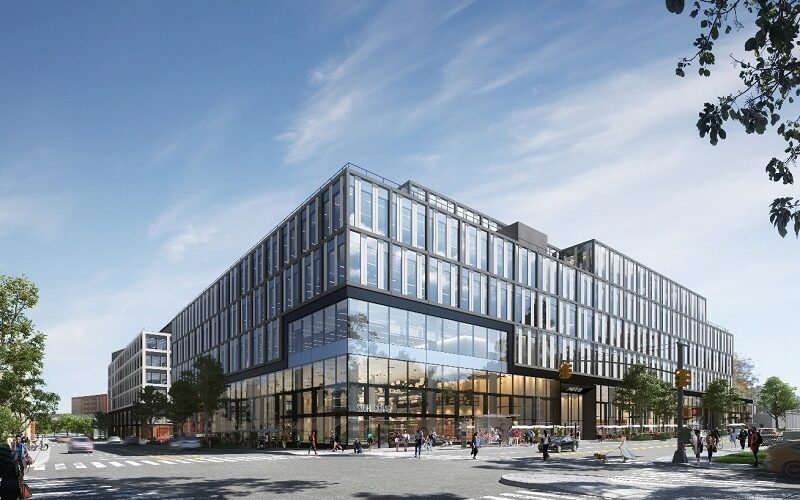 “When I outlined my economic recovery blueprint last month, I spoke about not going back to the way things were before the pandemic – and that is what this strategy and this groundbreaking are all about,” said Mayor Adams. “We are building a more inclusive economy that works for all New Yorkers, in every neighborhood and every borough, and city government is leading the way.”

A rendering of the building coming to 2440 Fulton Street – part of phase one of Mayor Adams’ new “CARE” strategy (credit: Lifang)

The new strategy leverages long-term city commercial leases to brings jobs closer to communities and catalyze new commercial development outside of traditional central business districts. The first phase is the result of a collaborative multi-agency effort between DSS, the New York City Economic Development Corporation (NYCEDC), the New York City Department of Citywide Administrative Services (DCAS), and developer the Leser Group. It builds on work NYCEDC began in 2017 to encourage investment in commercial markets across the city.

The new building at 2440 Fulton Street, developed by the Leser Group and designed by Marvel Architects, will bring best-in-class commercial space that will host more than 1,100 employees from DSS’ Human Resources Administration (HRA), along with private-market tenants, in the heart of East New York. The new space will allow HRA to improve client experience with rapid electronic check-in systems, upgraded self-service technology, and expanded waiting areas. The new building will also offer about 80,000 square feet of private-market commercial space, including new retail space along Fulton Street, Herkimer Street, and Van Sinderen Avenue.

“With this project in East New York, we advance two critical goals – bringing city services closer to the people that we serve and catalyzing the creation of office space for local businesses,” said Deputy Mayor for Economic and Workforce Development Maria Torres-Springer. “I’m thrilled to see this project come to life and look forward to working with my partners in government to expand the CARE strategy across the city.”

“The CARE strategy is an innovative solution to support new development in underserved areas across the city and is a key component of Mayor Adams’ blueprint for the city’s economic recovery,” said NYCEDC President and CEO Andrew Kimball. “Today’s groundbreaking is just the beginning of utilizing city offices to create new commercial centers –bringing quality jobs, services, and amenities to neighborhoods across the city.”

A rendering of the building coming to 2440 Fulton Street – part of phase one of Mayor Adams’ new “CARE” strategy (credit: Lifang)

In addition to 2440 Fulton Street, NYCEDC is currently reviewing proposals for the next phases of the “CARE” strategy in Queens and the Bronx. More information is available here.

“For too long, East New York has been at the receiving end of both private and public disinvestment, predation, and neglect,” said New York City Councilmember Sandy Nurse. “We are encouraged by the city’s ‘CARE’ strategy, and we hope that today signals a new commitment by the city and this administration to direct public attention, time, and investment to my district. We are eager to work collaboratively with local stakeholders and this administration to bring more public dollars to our community and do local, community-informed economic development more equitably than ever before.”

“After years of community engagement and planning, today marks a new beginning for Broadway Junction,” said Bill Wilkins, director of economic development and housing, Local Development Corporation of East New York. “We are starting to see the fruits of our advocacy and hard work to create new jobs and opportunity for East New York. This public-private partnership between the city and the Leser Group is a major step in the right direction, and we commend Mayor Adams for prioritizing progress for the Junction.”