Home Features David Dinkins, New York’s First and Only Black Mayor Passes Away at 93 – From Barber’s Son To Mayor
FeaturesPolitics

David Dinkins, New York’s First and Only Black Mayor Passes Away at 93 – From Barber’s Son To Mayor 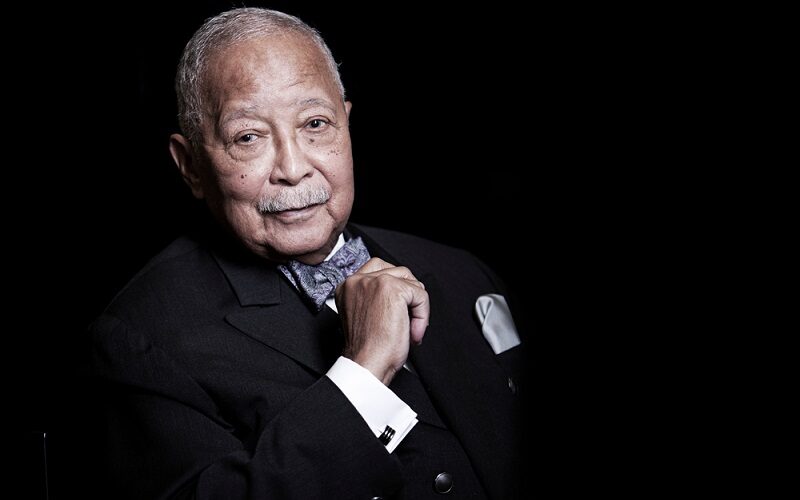 by Christine Reyes for NYC Politics

As New York City’s 106th mayor, Dinkins was dedicated to improving race relations and improving the growing issue of crime that plagued New York City in the early to mid-1990s.

From Barber’s Son to Law School

The son of a barber, Dinkins was born on July 10, 1927, in Trenton, New Jersey. He went on to serve in the U.S. Marine Corps. After his time in the military, Dinkins attended Howard University on the GI Bill, where he earned a bachelor of science degree in mathematics. From there, Dinkins went on to practice law after attending Brooklyn Law School in 1956.

Dinkins officially started his political career in the late 1960s as a member of the New York State Assembly. After holding a number of positions within New York local government, he began to eye a run to become New York City’s Mayor in the late 1980s.

In 1989, Dinkins ran to become New York City’s first—and only—Black mayor. He narrowly defeated Rudy Giuliani, who would come back four years later to keep Dinkins’ run as mayor to one term.

Dinkins’ ascension to New York’s Mayoral position came on the heels of Democrat Ed Koch’s controversial stint as mayor. While some praise Koch’s efforts to revitalize areas within the South Bronx, Harlem, and Central Brooklyn, overseeing the improvement of Time Square, and attempts to fix the abandoned housing problem—there was a significant issue: an unsavory relationship with African Americans.

Dinkins’ election was seen as a rejection of the racial tensions that seemed to flare during Koch’s time as mayor. In one of his first speeches after becoming mayor, Dinkins outlined his commitment to healing racial divides and seeing the diversity of New York City as an asset:

“I believe that the next mayor has to be committed both to integrity—and to social justice…New York may not wear its heart on its sleeve, but it has a conscience. We are a beautiful mosaic—a community of individuals and families from every racial, religious, and ethnic background —and working together; we can achieve greatness.”

A Term of Wins and Challenges

Dinkins managed the situation that he inherited and made significant attempts to address some of New York City’s most pressing issues. He expanded affordable housing, created the Civilian Complaint Review Board —a city agency meant to investigate police misconduct complaints, and had one of the most diverse lists of agency leaders in the New York City’s history.

Nevertheless, his tenure as mayor was plagued with several racially-related riots and severely rising crime. The latter, Dinkins addressed by establishing the “Safe Streets, Safe City” program where he grew the number of NYPD officers to 42,500.

Yet, for many, Dinkins’ four years were defined by his handling of the Crown Heights riots. In August 1991, a young Black boy was killed after being hit by a car driven by a Hasidic Jew. Within hours, a group of Black men killed a young Jewish student in retaliation.

This event led to riots and stand-offs between Black and Hasidic populations. Many felt that Dinkins’ response to this event and other racially-related disputes were too slow. These instances led to criticisms, which likely opened the door for his defeat by Giuliani in 1994.

A Legacy of Education, Charity, and Overdue Acknowledgement

Once he left office in the mid-1990s, Dinkins entered the world of higher education. He became a professor of public policy at Columbia’s International School of Public Affairs and sat on the board of many charitable and nonprofit organizations like the Children’s Health Fund and Council on Foreign Relations.

His work during and after his time as mayor was acknowledged by New York City’s current mayor, Bill de Blasio, who credited Dinkins for what he brought to the city of New York:

Over the years, Dinkins is receiving more acknowledgment for the things he accomplished as mayor. J. Phillip Thompson, an educator at the Massachusetts Institute of Technology who used to work for Dinkins, talked to the New York Times about his perception that people are coming around to see the positive impact Dinkins indeed had:

“A lot of the things that de Blasio has been successful around, such as his emphasis on affordable housing and universal pre-K, those were things that Dinkins pushed for very hard,” Mr. Thompson said. “Also, the way he went after the crime issue was a much deeper approach to community policing than Giuliani had, and over time those approaches have proved to be more effective. And you avoid the issues we got into with stop and frisk and police chokings. Dinkins worked hard to develop strong relationships between the police and the community.

“He doesn’t get credit for a lot of those things,” he added. “Giuliani took credit for reducing crime, but he isn’t the one who hired 5,000 cops with a $3 billion budget gap. The narrative tends to skip over that.”

Dinkins’ death comes almost three months after the death of his wife, Joyce Dinkins, who passed away on October 11, 2020, at 89. Dinkins is survived by his two children and grandchildren.

Previous PostLIVESTREAM Discussion: Amazon Coming to East New York The Good and The Bad on ‘VOICES of East New York with Nikki Lucas'

Next PostNYC Housing Connect Offers New “Affordable” Units in East New York – Is The Lottery System Helping All Who Need It?