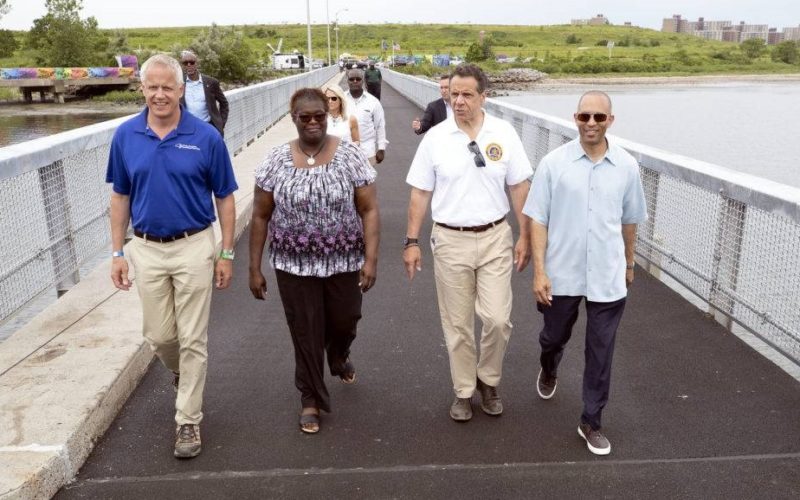 Governor Cuomo, Senator Roxanne Persaud and Congressman Hakeem Jeffries announced the opening of the state’s newest and largest public park in New York City, the 407-acre Shirley Chisholm State Park along the shores of Jamaica Bay. The new park honors Congresswoman Shirley Chisholm, an educator, former representative of the 12th Congressional district in New York for seven terms and the first African American woman to run for president. The park is a signature project of Governor Cuomo’s Vital Brooklyn Initiative, which calls for 34 new or improved pocket parks, community gardens, playgrounds and recreation centers within a ten-minute walk of every Central Brooklyn resident.

“Today we add another gem to our treasure trove of state parks, transforming what was once a blemish on the South Brooklyn community into exquisite open space,” Governor Cuomo said.“Shirley Chisholm fought to improve the health and wellness of underserved communities, a legacy we are carrying on through the Vital Brooklyn Initiative, so we are proud to dedicate this park in memory of her leadership and accomplishments.”

Under the initial $20 million phase, the park will provide ten miles of marked trails for hiking and biking; a bayside pier for picnicking and fishing along the park’s Pennsylvania Avenue side; and water access. Environmental educators will offer programs for children who visit the park, where partnerships are planned with environmental groups such as Audubon New York. In addition, a partnership with Bike New York will create the Shirley Chisholm State Park Bike Library, offering free loaner bikes off all sizes to ride the crushed stone trails of the park.

The park also features a colorful mural honoring Chisholm by Brooklyn muralist Danielle Mastrion. Chisholm, a Brooklyn native, was the first African American woman elected to Congress in 1968. She ran in the Democratic primary for President in 1972 as the first African American woman to seek the nation’s highest office. A decade after her death in 2005, she was awarded the Presidential Medal of Freedom by President Barack Obama.

Under a second $20 million phase currently under design, additions to the park will include a grand entrance on Fountain Avenue; lawn patios – with one large enough for open-air community gatherings and performances; a patio overlooking Hendrix Creek; and pop-up environmental education facilities in both the Fountain and Pennsylvania Avenue sections of the park. This work should be completed in 2021.

The park is a prime excellent example of the beneficial reuse of a formerly contaminated property. State Parks worked closely with the New York State Department of Environmental Conservation (DEC) to craft redevelopment plans that are protective of public health and the environment. DEC will continue to work closely with State Parks as subsequent phases of the park proceed in the future.

Congressman Hakeem Jeffries said, “Shirley Chisholm famously said to bring a folding chair if they don’t give you a seat at the table and that’s what she did all her life. Whether it was her groundbreaking election to Congress in 1968, or her historic run for President, she never stopped fighting to make sure every voice was heard. Governor Cuomo is to be commended for this important effort to honor Shirley Chisholm’s legacy.”

Senator Roxanne Persaud said, “Today we begin another exciting day in Brooklyn as we open the first phase of the Shirley Chisholm State Park. Residents of Senate District 19 can look forward to enjoying water sports, hiking, picnicking and other wonderful and healthy activities not far from their homes. No longer will we need to travel miles away to enjoy activities on the water; we now have a state of the art park in our back yard. I commend Governor Cuomo for including this park in the Vital Brooklyn plan and look forward to the full completion in 2021.”

Assembly Member Latrice Walker said, “Shirley Chisolm State Park is just one of the many remarkable transformations of central Brooklyn under Vital Brooklyn. Thank you Governor Cuomo for both recognizing and working with all of us to take the action necessary to improve upon these community treasures. Being the largest state park in Brooklyn, I’m confident Chisholm State Park will provide the residents of East New York and all of Central Brooklyn with the green space to benefit our environment and to provide families with the park space they deserve.”

Next PostHealthyNYC Expo Has Expanded Into a Health Series That Includes East Brooklyn, Central Brooklyn, Queens, Manhattan and the Bronx