VIDEO OpEd: De Blasio Must Resign Immediately After NYPD Arrest Woman With Small Child for Not Wearing Her Mask Correctly 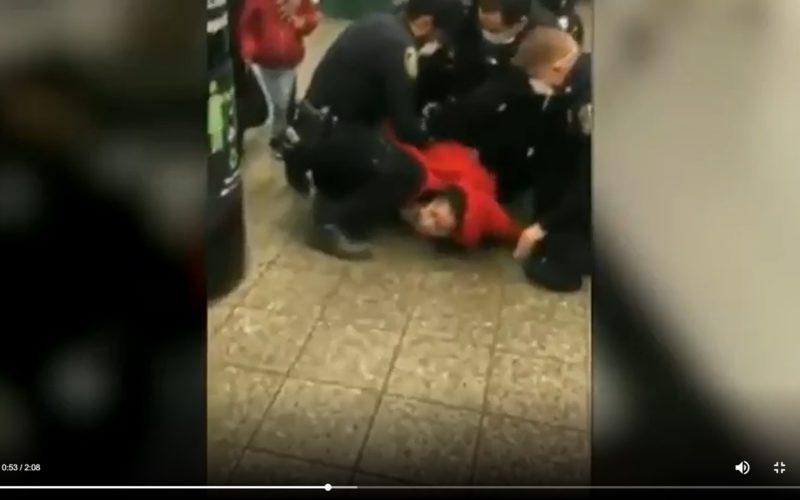 The fact that Mayor De Blasio is repeatedly explaining to New Yorkers that racism among the NYPD is “not a part of our values and not who we are”, speaks volumes. Mr. Mayor this is exactly what New York City stands for and it is a part of the values of the NYPD, and the Office of the Mayor.

It is unthinkable that multiple NYPD officers threw a woman to the ground and arrested her, while she was with her small daughter for not wearing her mask correctly. Mr. Mayor this happens way too often for you to continue to say “this is not who we are as New Yorkers”. De Blasio, your head is stuck in the sand and as the leader of the city, these actions directly represent your values as a human being. This is who you are. (See the video below)

In white areas people are given masks by the NYPD, but in the black neighborhoods residents are arrested and beaten. Members of the NYPD either have orders to arrest and beat black residents or they are inherently racist. That is the only conclusion that makes sense as we continuously watch them act in this manner.

Mayor De Blasio should step down today for allowing this to continue to fester, particularly during this time when all New Yorkers are feeling pain.

Mayor De Blasio must remove himself as the Mayor of New York City immediately. He and the NYPD are disgraceful.

Via @shaunking • What you are looking at is a young mother in New York on the subway WITH HER BABY. She was WEARING A MASK, but the NYPD began harassing her for “not wearing it properly. ⁣ ⁣ Mind you, this is all in the name of “social distancing.” In the name of safely staying away from people, they brutalized and traumatized her in front of her baby. All while the NYPD has one of the highest rates of infection in the world. ⁣ ⁣ I am so livid. ⁣ ⁣ Let me tell you something @NYCMayor & @NYPDShea – this will be your legacy forever. PERIOD. ⁣ ⁣ You aren’t doing this shit in the Upper East Side. You aren’t doing it with ANY white folk, period. ⁣ ⁣ With white folk, you all are calmly passing out masks and taking selfies. ⁣ ⁣ But with Black & Brown people, even young mothers with their children, you default to brutality. And when we’ve called for you to intervene, you’ve done NOTHING. It’s shameful. You are shameful. ⁣ ⁣ #RespectMyHair 💕