Real PEOPLE of ENY: Tiffany Holder Has a Story of Perseverance That is Inspiring 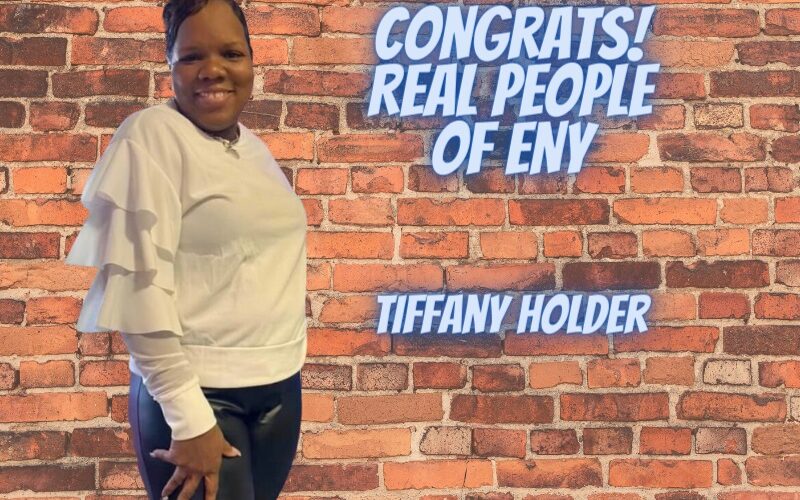 Tiffany Holder wears many hats. She is a single mother of three, a student, an entrepreneur, a soon-to-be social worker, PTA president and executive bookkeeper. Born and raised in East New York by a single mother in New York City Public Housing, Holder said it was kind of rough. She saw her neighborhood of Cypress Hills go through dramatic changes over the last twenty something years.

“When I was growing up, things were different you know. We had the community centers open. We had the PTA, the tenants’ patrol and all of that going on, you know and then the crime rate went up and people started shooting and crime got really bad especially in Cypress Hills. They used to call it dark city because you didn’t know which way the bullet was coming. It was really rough. It got really rough in the late 90s.”

Being a single mom like her mother was hard. Tiffany learned a lot from her mother that helps her navigate through single motherhood. “It takes a lot of strength and I pray a lot to get through because I have three different personalities. I have two girls and a boy. Each pregnancy with them was totally traumatic but different in different ways. I have a teenager, a pre-teen and a toddler. But I learned that my mother was firm but fair,” she said.

As the baby of the family with four older siblings, Tiffany’s mother worked hard to provide her with a good life and education. After graduating from August Martin High school in 1997, she attended John Jay College of Criminal Justice for two and half years before transferring to Brooklyn College where she earned her Paralegal Certificate in September 2003. She did a one-year paid internship with her professor at the time.

In December 2005 Tiffany welcomed her first child while looking for a job in the legal field. She said the challenges of finding a job were enormous. First, it was about experience. “They want you to have all these years of experience and it’s impossible if you went to school for a certain amount of years and you’re just coming out. The only experience that you have is what you studied. So it was very hard. You know you have the credentials for the position but now they want you to have like five, six years’ experience. And it’s very hard, very competitive.”

Then, there was the bilingual issue. “If you weren’t bilingual, they’ll take the person who’s bilingual over you because that was advantageous to them. So you had to kind of teach yourself in order to get a position. Sometimes you had to fake it till you make it in order to get your foot through the door,” she said.

Tiffany landed a job as a paralegal consultant with the New York City Transit Authority’s Law Department, where she worked for 13 years. During those years and being a mom, she studied for and earned her Associates Degree in Criminal Justice at ASA College in 2008.

Tiffany said it was very challenging working as a paralegal consultant at the Transit Authority and being a mom. “They looked at it as independent contractor, so I didn’t get the benefits that regular Transit Authority workers get, like the bus pass, medical coverage, everything I had to pay for on my own on a salary of $14.50 an hour. If you didn’t come to work, you didn’t get paid like the regular city worker. Sick time, vacation pay, I didn’t get none of that.” She added that it was straight payroll. You come to work Monday through Friday, 9-5 or 10-6. That’s exactly what you got paid.

Tiffany welcomed another baby girl in 2010 who came a month early, so she took a year off. In January 2013 she left New York City Transit Authority to continue her legal career in the private sector. She worked as a paralegal for various law firms until 2016 when she left her job to taking care of her sick mom until she passed in September 2017.

Tiffany said it was very hard for her to make the decision to quit her job to take care of her mom. “That was really difficult and that was a difficult time because I didn’t know how sick my mother really was because she kept it kind of quiet from me. She told my other siblings, but she knew if she told me, I would not have taken it so well. But when I finally found out, I resigned and then dedicated that time slot for her for two years.”

She promised her mom before she passed that she would go back to school and finish her degree. Unknown to her mom, she had enrolled at Berkeley College a few weeks prior to her passing. Now that she’s fulfilling her promise to her mom by being back in school finishing her degree, Tiffany said her mom would be very happy and proud.

Taking care of her premature baby and studying wasn’t easy for Tiffany. “That was hard because he needed round the clock care, so I spent most of my day from 9 to about 4:30 with him in the hospital NICU everyday, then I’ll come home to my little daughter and oldest daughter, help them with homework, then I’d do my homework later when everybody was asleep, and do this over again seven days a week until he came home in January. He spent three months in hospital.”

Now that she has three kids, Tiffany’s time is now split into three. As she was still attending classes online and being a stay-at-home mom, she had to be financially stable to support her family so she launched her own baking business called Sweets by T.

“This business helped me financially and I gained connections. Being at home taking care of three kids and going to school online and running a business was very stressful, but things began to turn around in August of 2019 when my daughter, Zaniyah was skipped from the 4-6 grade and she joined The Campa Charter Middle School where I currently serve as the PTA President,” Tiffany said.

In January 2020 Tiffany took a job with Human Resources Administration as a community specialist with the Fair Fares program. In March 2020 she was assigned to work at home remotely due to Covid-19. Since March 2020, she’s been working from home, going to school from home, running two businesses, being the teacher, principal, nurse and cafeteria to her kids attending school remotely.

Tiffany said she doesn’t know how she does all these things but that it takes balance. “Like being the PTA president, I hold my meetings every other Friday. Other meetings are between those meetings. Some meetings are during the day when I’m working from home.” she said. “Because I work from home It gives me the opportunity to do other things that if I was in the office I’d have to wait until I get home. But since being at home, in between work, I get to work on this project, talk to these people, work on this, work on that. So it’s all about balancing, giving each thing some attention throughout the week,” she said.

Tiffany is looking forward to a future with dream goals to accomplish. “I pray that hopefully, I get to walk across the stage in January of 2022 with my bachelors in my hand. That’s one goal down. My other goal is to move into our house soon, so my kids all have a separate room and just pursue my career in social services. I just like helping people so when I put the legal field down and came over to the social services side, I said this is where I need to be. Social services,” she said confidently.

By Florence Mafomemeh for JIG Media