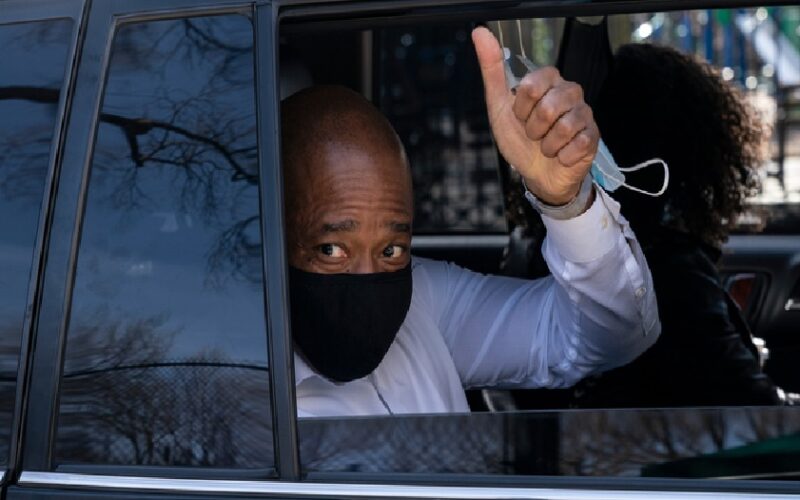 The lead in the New York City Democratic Primary race has switched hands. Eric Adams has just raced past Andrew Yang, a new GQR poll shows. This is the first time Yang has lost the lead since his entry in mid-January changed the race. The Washington, D.C.-based polling and strategy firm conducted a three-day survey which found Adams in first place with 21 percent, followed by Yang with 18 percent and City Comptroller Scott Stringer with 15 percent. The rest of the candidates were in the single digits. with 11 percent of those polled said they were undecided just seven weeks into the crucial June 22 primary.

In a previous recent poll by StudentsFirstNY, a charter schools organization, the Brooklyn Borough president was gradually closing the gap with just 6 points behind Yang, who recently lost the endorsement of an LGBTQ group to Scott Stringer because of his remarks that were perceived as “Tokenizing.”

Reacting to the polls, Evan Thies, spokesperson for Adams said the poll reflects the work they’ve been doing.  “The poll shows what we have been doing on the ground for months – that New Yorkers want Eric to be the next mayor because they share his vision for a safer, fairer city where prosperity is shared by all,” said Thies.

But Yang’s co-campaign manager, Chris Coffey, downplayed the polls. “Every other poll has us in first place, but we’ve always said this would be a close race. The only poll that really matters is the one on June 22 and we expect to win that one,” said Coffey.

Rick Fromberg, senior Shaun Donovan adviser said anyone can still come from behind and win this race. “It’s clear this race is wide open and will break late, and this poll is yet another that speaks to exactly that dynamic. It’s also important to remember that the candidate who was in Shaun Donovan’s position at this stage of the race in 2013 is the current mayor.”

Despite his big leap in the poll, Adams, who has been getting quite a good amount of media attention, has barely touched his campaign funds. According to the New York City campaign Finance Board, he still has almost $8 million to spend on TV ads.

Meanwhile, Adams picked up two significant endorsements. William Bell Sr., the father of Sean Bell who was shot and killed by NYPD officers in 2006, came out in full support of Adams. In a press conference at 1 Police Plaza, New York, Bell Sr. called Adams a very caring human being who was always there during those difficult times and that Adams has lived through the issues he wants to fix.

“He’s been on both sides of the fence. It’s not all about politics as all of these politicians. Most of these candidates are all about politics. They don’t know about what’s going on at the end of the street. They’ve never been in the hood. He has been there. They have not experienced the street. But this young man has,” said Bell Sr.

He added that it’s rare to have someone out there who comes to you with open arms when in need and that it’s his pleasure and honor to endorse him.

Accepting his endorsement, Adams, the former police officer who speaks openly about being assaulted by police officers when he was a teenager and at the same precinct where Sean Bell was killed, said he values how Bell Sr. and his family turned pain into purpose, becoming a symbol of strength and fortitude to ensure that our city becomes a safe place for all young people.

“I know it far too well, ironically. Sean was shot in the 103rd Precinct, a precinct that is forever connected to me. That’s the same precinct where I was arrested and beat by police officers. 45 years later, it’s a continuation that continues to benchmark the lives of black and brown people and black and brown families. And that’s why I joined the police department to fight from within.”

Pointing out that officers who kill unarmed young black men are never brought to justice despite street protests, he said Sean’s death remains an open wound and we must start the process of healing it.

Abner Louima, an NYPD assault survivor is another face of police brutality that has jumped onto the Team Adams wagon. Endorsing Adams at City Hall Park, Louima, the Haitian man who was physically attacked, brutalized, and sexually assaulted by New York City Police Department (NYPD) officers in 1997 said New York needs a great leader with a big vision. “I believe he’ll be the greatest mayor for the great city. I happen to know Adams through my ordeal but he always stays to himself. He believes New Yorkers should live together. He’s gonna be a mayor to unite each and every one of us,” said Louima.

Relating to Louima’s assault experiences, Adams who served for 22 years in the NYPD said they were both in dark places but they turned those dark places not into barriers but into plantings, and the fruit of his harvest is igniting the call for justice for all the victims of police brutality,” Adams said. “I move by the memory of Mr. Louima sharing his story from a hospital bed. I can still see that picture of him talking about his story exposing injustice. It has been one of the honors of my life to call him a friend and fellow warrior for justice,” added Adams.

Focusing almost solely on the rise in gun violence across the city, Adams, who served 4 terms as a New York State Senator is positioning himself as the candidate vowing to tackle a steady spike in crime.