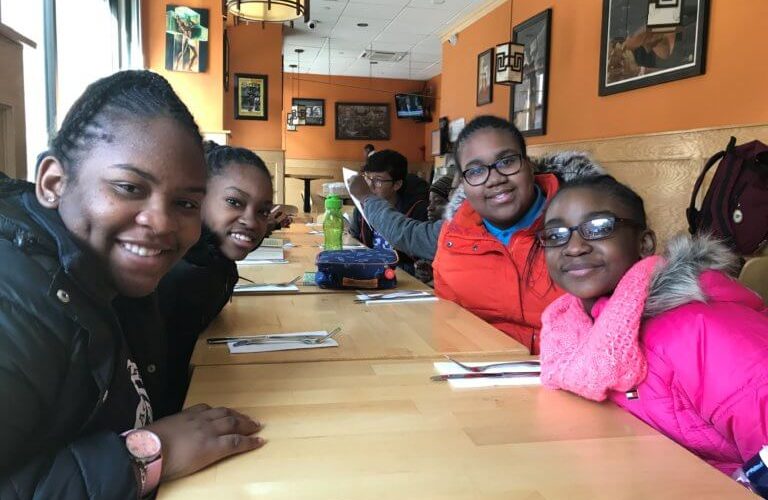 What do the Cupid Boys and Shining Diamonds have in common? They’re teams from Achievement First Linden Middle School, a Greenfield school, in East New York. Several times a year, students have the opportunity to explore a field they’re interested in, like business, and take trips into the community to learn more about that field.

This expedition started off in the classroom. Students learned important aspects of starting and running a business, and they worked in small groups (including the Cupid Boys and Shining Diamonds) to create their own business plans. After a week of discussing market research, target markets, and advertising, students took their newly learned skills out into the real world on a trip to meet with local business owner, Andrew Walcott, at his restaurant, Fusion East.

As soon as students arrived at Fusion East, they broke up into small groups with their business team to discuss their first impressions of the restaurant. Nickayla, part of the Shining Diamonds team shared with her group, “I noticed the sign outside with today’s specials. The music is nice and calming, but it’s still quiet so customers can talk. Customers can also watch TV while they wait for their food.” Other students, like Davien, a member of the Cupid Boys team, noticed the art around the restaurant depicting African-American culture.

After working up an appetite, students enjoyed a meal of jerk chicken, chicken and waffles, or cheeseburgers. They also had the opportunity to hear Mr. Walcott’s story of starting a business from the ground up. Students were curious to know the challenges he faced and the type of advertising he uses to attract customers.

Once questions were wrapped up, students gave the owner special shoutouts related to the Greenfield compass values. Nickayla said the owner showed drive, perseverance, and noble purpose because “he had a dream and he believed he could do it and then he did it.” She said, “I don’t think people should just settle for good. They should strive to be better.”

As soon as students got back to their classrooms, they opened their laptops to write letters to Mr. Walcott and work on their business plan presentations. We can’t wait to see what our young entrepreneurs do on their next Greenfield Expedition!

Next PostDJ Kenny Celebrates His Birthday At The Canarsie Adult Day Center on Friday, March 29th!

KOTA the Friend Supporters Lineup in Brooklyn On His Birthday Weekend

History of HealthJox And How It Has Adjusted During the Pandemic

$425 Million ‘The Fountains’ Development in East New York Has Been Completed With 1,163 Units of Affordable Housing

The Pros and Cons of Vegan Diets