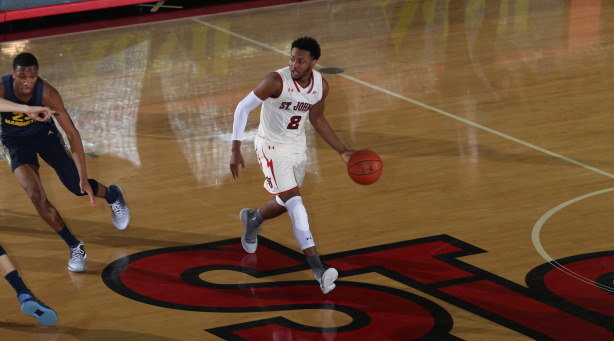 After seeing the sophomore average 30 points in three-straight games against top-six teams, one could only wonder what Shamorie Ponds would do for an encore on Saturday afternoon in front of a sold-out crowd at Carnesecca Arena. The sweet-shooting lefty from Brooklyn answered by scoring more than any other player in the 57-year history of the building, netting 44 points and leading the Johnnies past Marquette, 86-78.

Ponds’ 44 points broke the single game record for Carnesecca Arena/Alumni Hall previously held by Malik Sealy, who tallied 43 against Central Connecticut State on Nov. 24, 1990. His total also tied for the fourth-highest in a single game in program history and the most by a St. John’s player since Marcus Hatten netted as many against Rutgers on March 6, 2003. Only two players in the 110-year history of St. John’s Basketball have scored more points in a single game than Ponds: Harry Boykoff (45 and 54) and Bob Zawoluk (65).

“I mean it is a blessing,” said Ponds when reflecting upon his historic effort. “All the great players who came through this university, for my name to be up there, it’s a dream come true.”

Ponds shot 16-of-23 from the floor on the afternoon and 4-of-7 from three-point range. In the second half, Ponds made nine of his 12 tries from the floor and scored 27 points.

Justin Simon recorded his seventh double-double of the year and his second in as many games, finishing with 16 points and 11 rebounds. He also dished out six assists, grabbed two rebounds and registered a pair of rejections.

Even Simon, who has been a major catalyst himself during the Red Storm’s recent run, admitted that he sometimes finds himself in awe of his teammate.


“He’s been playing amazing basketball these past couple of games,” said Simon. “I love giving him the ball and seeing him go to work and these past games he’s done just that.”

Marvin Clark II narrowly missed a double-double with nine points and nine boards, while Tariq Owensadded nine points on 4-of-6 shooting to go along with three rebounds and a block. Bashir Ahmed also turned in an all-around solid effort for St. John’s, tallying eight points and seven boards.

St. John’s won the battle on the boards for the second-straight contest after failing to do so in 17 consecutive tries, outrebounding Marquette 37-31.

Marquette scored the game’s first six points in the opening two minutes of action, but the Johnnies quickly answered with an 8-0 run of their own, taking their first lead of the game on a Ponds triple with five minutes gone in the contest.

After the teams traded buckets for the next few minutes, the Golden Eagles rattled off five unanswered, moving ahead by four, 19-15, with 10:29 to go in the first half.

Leading by seven, 26-19, following a trio of Rowsey free throws just over three minutes later, Simon sparked a 9-0 run for the Johnnies with a layup, as the Red Storm regained the lead by a pair, 28-26, with four minutes remaining until the intermission. The Golden Eagles went stone cold during the St. John’s run, making just two of just 13 shot attempts in the final nine minutes of the half.

Ahead by that same two-point margin, 34-32, at the break, the Red Storm received five-straight points from Owens to kick off the second half, bumping its advantage to seven, 39-32, and forcing a Marquette timeout just 42 seconds into the action.

Marquette shaved its deficit to just a pair following a 7-2 spurt less than two minutes later, but the Johnnies answered with a 7-2 run of their own to rebuild a seven-point lead, 48-41, following four-straight points from Ponds.

After building its lead to as many as nine, the Red Storm saw Marquette get back within three, 58-55, on a Markus Howard triple with 10:10 to go.

From there, Ponds caught fire, scoring the next 13 points for the Johnnies as they built their lead to 10 for the first time on the afternoon. Beginning with an old-fashioned three-point play, Ponds went 1-for-2 from the line before adding another three-point play to bump the lead to seven. After Marquette cut the lead to four with a Hauser three-ball, Ponds responded with back-to-back triples of his own, sending the Carnesecca Arena crowd into a frenzy and bumping his point total on the night to 34.

The Red Storm kept the Golden Eagles at bay down the stretch, expanding its lead to as many as 12 while not allowing Marquette to get any closer than eight. Ponds scored 10 points in the final four minutes of the game to reach his historical total.

St. John’s returns to action on Wednesday night in The Windy City, taking on DePaul at Wintrust Arena. Tip-off is scheduled for 9 p.m. on CBS Sports Network.

Next PostSouth African Storytelling and Maskmaking presented by Urban Stages At The New Lots Library On Friday, February 9th