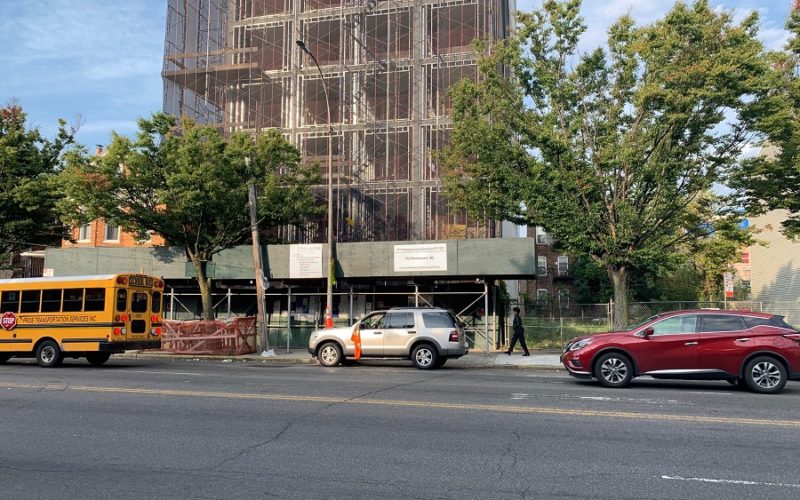 Just last week a 15 year resident of East New York wrote an OpEd on EastNewYork.com complaining about a hotel being built just one block from Maxwell High School in East New York, on the exact block where there is rampant prostitution. The hotel she referenced is located at 367 Glenmore Avenue, and looks like it is ready to open in the next couple of months.

Unfortunately that’s just one of many hotels preparing to open in that same vicinity. Another hotel is halfway built at 314 Pennsylvania Avenue, just 2 blocks from Thomas Jefferson High School. According to YIMBY, the permit papers were filed for this 7 story hotel back in 2016, so the local elected officials and Community Board 5 should have been well aware of its development.

On social media concerned residents went back and forth about which Council person should be responsible for allowing these hotels and prostitution to exist just one block from schools. Councilman Rafael Espinal and Councilwoman Inez Barron both have sections of East New York in their districts, with hotels on both sides of their districts, within 1 to 2 blocks from schools, which puts the blame on both of them.

With all of the development and rezoning happening in East New York, these hotels and the increased level of prostitution is hard to understand. The question of the day is how can this happen? Are the elected officials blind to what is going on or are they just ineffective or incompetent when it comes to dealing with quality of life issues in their districts.  In either case, this is a problem that will have a negative impact on the East New York community for years to come. They should have seen this coming and they should have been able to come up with a solution.

It’s a sad day for East New York. Thank goodness for term limits. Both Council Members are in their final term, which will open the door for someone with new ideas to tackle these issues. Prostitution in East New York seems to have increased throughout the years, while developers are running through the neighborhood grabbing all the property for hotels. Who wants their children going to school 1 to 2 blocks from prostitution and hotels? This can’t be right.

The Pros and Cons of Vegetarian Diets

Is the COVID-19 Vaccine Safe for Kids?

On Wednesday, September 29th at 1:30pm PS Family will be hosting a virtual info session for in-home childcare providers interested in affiliating with our network. At this FREE Info Session providers will learn what PS Family can do for their childcare businesses in Brooklyn and Queens.

Features and benefits for providers who join the PS Family network include:

PS Family is one of  35 networks that were awarded contracts to supervise family child care providers in Brooklyn and Queens. Networks ensure that providers are trained in best practices, verify parent payment eligibility, and adhere to all DOE Guidelines. PS Family offers all this and more. For more information about PS Family visit us at psfamilynyc.org